The Clash of Fundamentalisms: Crusades, Jihads and Modernity by Tariq Ali 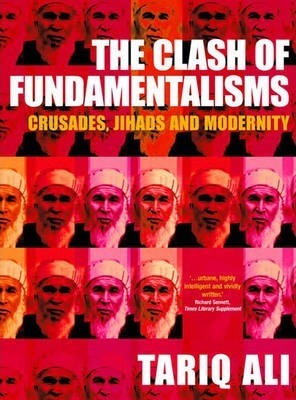 The Clash of Fundamentalisms: Crusades, Jihads and Modernity by Tariq Ali

The inviolability of the American mainland, breached on 9/11/2001 for the first time since 1812, led to extravagant proclamations by the pundits. It was a sudden menace confronting the twenty-first century, an event of unprecedented dimensions, a new world-historical turning point.
Tariq Ali challenges these assumptions, arguing instead that what we have experienced is the return of History in a horrific form, with religious symbols playing a part on both sides: ‘Allah’s revenge’, ‘God is on Our side’, ‘God Bless America’. The ‘war against terror’ is a clash of fundamentalisms, religious versus imperial. Each is honored by time-honored features – a shameless use of disproportional military power by one and a carefully targeted fanaticism by its Other. The two forces are hardly equal. One is a product of despair, the other is an empire, whose ability to go to war is a chilling reminder of its place in the world. Contemporary politics is conducted and presented in the elitist style of intelligence agencies: disinformation, false information, exaggeration of enemy strength and capability, explanation of a TV image with a brazen lie and censorship. The aim is to delude and disarm the citizenry. Everything is either over-simplified or reduced to a wearisome incomprehensibility.
This wide-ranging book blends history, literature, politics and autobiography to challenge the conformist culture of our times. Ali argues that many of the values proclaimed by the Enlightenment retain their relevance, while portrayals of the American Empire as a new emancipatory project are fatally misguided. Tariq Ali is a well known British socialist and will speak at the Socialist Labour public meeting on Saturday, 25th September.

The clash of fundamentalisms crusades, jihads and modernity by Tariq Ali (z-lib.org)