A Rebel’s Guide to Alexandra Kollantai 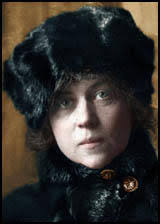 A Rebel’s Guide to Alexandra Kollantai

Alexandra Kollontai was a revolutionary socialist who devoted her life to the fight for women’s liberation and human freedom. She played a prominent role in the Russian revolutions of 1905 and 1917. Kollontai located the struggle for the liberation of women at the centre of the fight for socialism. A committed internationalist, she was one of a number of socialist women who launched International Working Women’s Day in1910 to celebrate and unite the struggle of women workers across the globe.

Kollontai became a leading member of the revolutionary party. At a time when most countries denied women the right to vote, she became the Commissar (Minister) of Social Welfare in the first Bolshevik government.

This short introduction to Kollontai’s life argues that her revolutionary ideas and activism contain vital lessons for the struggle for socialism and women’s liberation today.