Russia: How the revolution was lost 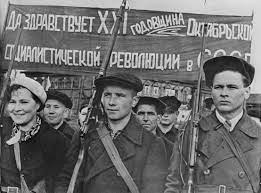 Russia: How the revolution was lost

Over a hundred years ago Russian workers and peasants overthrew the Tsar and went on to run society without bosses. They fought to create a socialist world based on human liberation and real democracy. The Russian Revolution was a truly momentous event. It transformed life in Russia and its empire, set off revolts that ended the First World War, and inspired millions across the globe. Women were at the forefront of these events, tearing up the deep-rooted oppression they faced. It was a workers’ revolution and a festival of the oppressed. Ultimately it was defeated and replaced by Stalin’s dictatorship, but its achievements still inspire. This pamphlet discuss what we can learn from them today as we fight capitalism, war, oppression and climate change.

Russia – How the Revolution was Lost